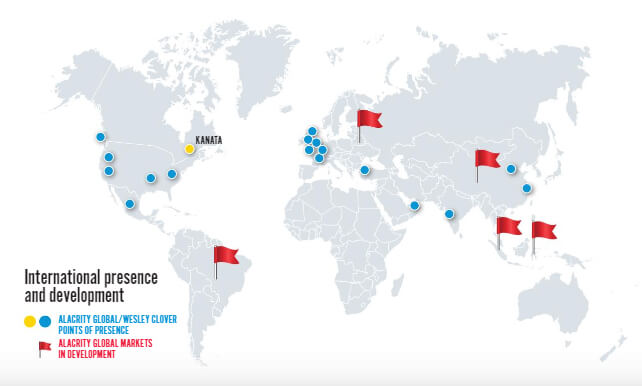 The Alacrity Global Initiative continues to expand its portfolio of tech startups and venture capital funds around the world, with recent additions in Mexico City and Pune, India.

The Alacrity Global Initiative was developed around five years ago by local company Wesley Clover, beginning in B.C. and expanding around the world. Alacrity and Wesley Clover now have a presence in France, China, Mexico, Turkey, the U.S. and many other countries, with more in development. The Alacrity model is based on the strategy used by Terry Matthews for decades, and involves the establishment of a network of micro funds of between $10 million and $20 million. Wesley Clover identifies local investment partners such as individuals and governments, then finds and establishes a fund manager, who works with local universities for recruiting.

“We work within the local economy,” says Greg Vanclief, the managing director of the Alacrity Global program. Working with the fund manager, Wesley Clover consults local customers to identify a need and a possible technology solution. Local universities focus on recruiting an entrepreneurial team to start the company.

Wesley Clover becomes a minority investor in the resulting fund, often along with Export Development Canada. Wesley Clover contributes intellectual property and resources to help companies grow more quickly. The startup can also partner with more than 50 Wesley Clover companies worldwide to use existing technology and access marketing channels so they can develop and deliver faster.

Once the entrepreneurs have been recruited, they take part in a one-month boot camp in Kanata. The program exposes the entrepreneurs to existing Wesley Clover companies, as well as trains them in business basics and development. In addition, they partner with local accelerator L-Spark to offer learning from the later stage of startup development.

Alacrity’s headquarters in Kanata are strategic for a number of reasons, according to Vanclief. One of them is, of course, Terry Matthews himself. Countries around the world draw upon the resources provided by Wesley Clover.

“What we do in Ottawa is we set the broad strokes of the global strategy,” says Vanclief. “We want them to be able to come to Ottawa and be able to receive and accept coaching.”

One example of the Alacrity model at work is three-year-old Istanbul, Turkey company Pisano, which Vanclief says has already had commercial success outside of its local market. Pisano works with retailers to help them identify and react to customer needs in-store. The company recently closed some outside funding, which Vanclief says is an important landmark for any Alacrity startup.

“It validates that the company has some market success,” he says. “We want these companies to start locally, but … with the viewpoint that they are going to go global as quickly as possible.”